The dancefloor filled early. Dancing  tentatively at first to a mix of northern and r’n’b, the atmosphere steadily grew. When the rocksteady kicked in, we had a party. Dab played a blinder, to be honest I didn’t recognize one record that he played. Obviously his record shopping in New York had paid dividends. Before this OOS I had wondered if this might be a less than popular OOS. The reason being that because of a broken foot the flyering of the city had been less widespread than usual. My worries over the night were soon allayed. There was a good crowd throughout, lots of new faces. Record of the night for me was “Take a Trip” – Jimmy Viks. Although looking back “Sufferer” –The Kingstonians made an impact early doors.  Here’s looking forward to May, and the 15th anniversary!

A rummage through the hinterlands of the sixties.With The Shake at the helm…

The Next OUT OF SIGHT…March 25th!

This March enjoy the dancefloor smashing sounds of DJ.Dab, Anna Vodka and The Shake! At the ACU (Utrecht) expect top sixties sound the whole night. From Garage to r’n’b, from ska to northern soul.
3 euros in.Keep the Faith!
www.out-of-sight.nl

The Next OUT OF SIGHT…January 21st

The first OUT OF SIGHT of the year should be a cracker.The return of DJ. Der Wolfshund promises the very best in garage and r’n’b. Anna Vodka will be there with ska, northern and beat. Plus the Shake with a box of 45s to startle and coerce a throbbing dancefloor. Expect only the best in sixties sounds.

Next OUT OF SIGHT: May 21st

This month we have the return of Der Wofshund (Barry from the Stilletoes). He’ll be setting the dancfloor alight with garage and r’n’b. Only the very best in alternative sixties sounds with also Anna Vodka and The Shake. At the ACU Utrecht and only 3 euros.

The Yardbirds, Ricki-Tick and Blow Up

Whilst perusing late at night on You Tube I revisited a favourite clip of mine. Its the club scene from the Antonioni film “Blow-Up” (1966). It still looks spot-on. But what I hadn’t noticed before was the bizarre design of the club. Stark black and white with large illustrations of faces. Outside on the street the club sign says “The Ricki-Tick Club”. It turns out this was indeed an actual club, with very similar design and iconography. 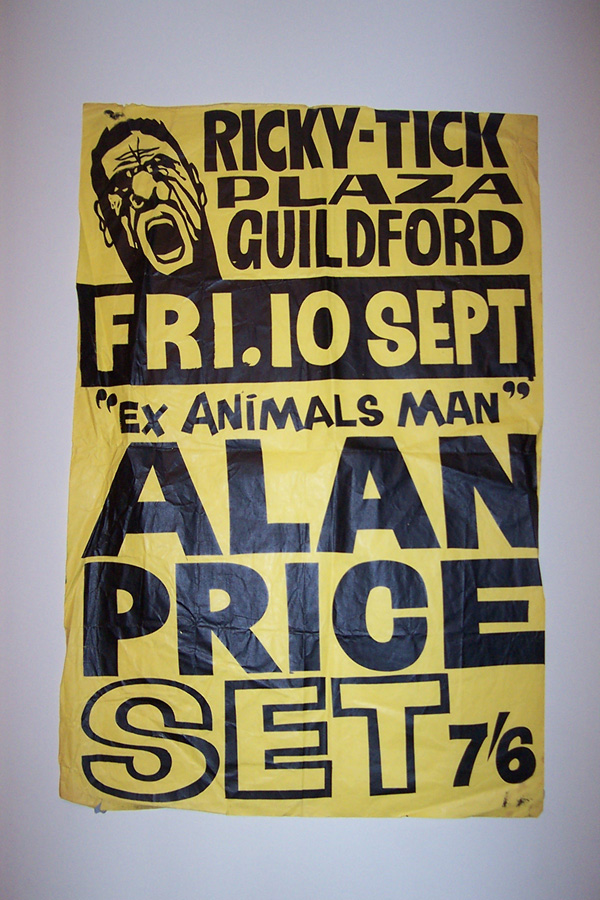 The Ricki-Tick club was a legendary early R’n’B club based in Windsor. Where The Stones, Yardbirds and visiting American artists would regularly perform. It was very influential on the burgeoning Mod scene. Which was I guess why Antonioni decided to re-create it in his film about swinging London. More can found at the Ricki-Tick Club website.

Apparently when Blow-Up came out it wasn’t particularly well received in the U.K. People having tired of the Swinging London image and tag. However it’s reputation as a film gained as the years went by. I really love this clip, apparently it also includes a very young Janet-Street Porter dancing in PVC pants towards the end. More about the background to the film can be read at the excellent blog anothernickelinthemachine.

The next OUT OF SIGHT!…March 12th!

Flying in from swinging London town, dj. Brother Jonno. He’ll be packing a caseload of the best 45s that money can buy. And bringing it all to the ACU, Utrecht. All the best ’60s sounds and more besides. Along with Anna Vodka and The Shake it should be a cracker… 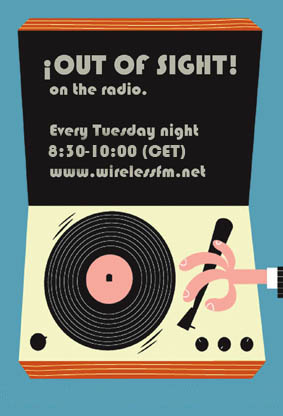 The club had seen better nights. Though as he would constantly tell himself, it was just a Tuesday night in Winter. In fact the girls sensing perhaps the blues of the season were girating with less than their normal verve. There was nothing else for it. He left, saddled his Lambretta and sped across town to the shake shack…

more shows can be heard at: www.out-of-sight.nl

Came across some more nice pictures of pop stars (and actors) with records the other day (although it also inexplicably includes Bill Clinton). They’re at this page.This was my favourite a long-haired Lennon, late sixties with a pile of singles. Please John don’t just fling those ’45s around!